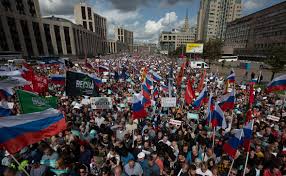 During the summer 2019 in Russia, thousands of demonstrators gathered on the streets of Moscow for protests on a scale rarely seen in this authoritarian country. This wave of protest was reflected in the results of the local elections last September, in Moscow and beyond. These events are revealing of moving dynamics of different natures.

In the local elections, in several regions, the candidates supported by the Kremlin, though they arrived in first position, were hit by a relatively severe step back. New representatives from diverse political horizons emerged. This was seen for example in the Far East, which suffers from great social difficulties and lacks clear policy responses to address them. This step back of Vladimir Putin’s party United Russiaand its allied forces at the local level reveals divergent strategies. The political forces which are not opposed to the system, while being loyal at the national level, are following a different strategy locally. Russian citizens are particularly interested in local affairs, in their regional government, which deals with land management and most economic and social issues. This can probably be explained by the vastness of the Russian territory. The difficult social and economic context – an area often put aside by the President – where many reforms are needed but rarely conducted, is therefore favorable to the opposition.

The most remarkable episode occurred in Moscow, the capital-region wielding great power and resources. Since last July and during the whole summer, the capital was shaken by important protests, of a magnitude not seen since the return to power of Vladimir Putin in 2012. With local elections approaching, the opposition “out of the system” was deprived of the right to present candidates to the Parliament of Moscow, under doubtful pretexts of unconformity. The population then rose in protest to demand fair elections, with at its forefront the well-known opposition figure Alexeï Navalny, also the leader of the Anti-corruption Foundation. The protests were sternly repressed by the government, leading to numerous acts of violence, arrests and judicial proceedings.

In this context of prevailing dissatisfaction, even before the protests of the summer, the strategy of the Kremlin in Moscow had been not to present candidates from United Russia, fielding instead representatives of civil society, supposedly independent while remaining loyal to the power. This was however not enough to stop the rise of liberal forces inflicting heavy losses to Kremlin-backed forces, who lost around half of their seats at the local assembly of Moscow on 8 September.

This result is quite striking in a country which went through a very specific history, where pluralism and political protest were very rare. After the fall of the USSR, in which all political pluralism was prohibited, the Russian society had known for a while a period of political expression in the public space. But this only lasted for a short time, as repression quickly struck back at the time of Boris Yeltsin during the 1990s. Russian society quickly went back to a state of political “apathy”, in which all hopes of alternance had vanished. Thus, political and social affairs remain strongly distinct in Russia, with the population mainly protesting on social issues, in demonstrations of limited size.

Nonetheless, political awareness still exists in the post-soviet space and often comes back to the fore in election periods. This was the case for the New Independent States during the revolutions of color in Georgia, Ukraine and Kirghizia in the 2000’s, or again in Russia when Vladimir Putin returned to power in 2012. The population rose against a feeling of injustice, as they felt their elections were being stolen from them.  This is an approach to be considered if one is to understand the events of last summer in Moscow, the struggle against corruption being key words during the protests.

As the elections were approaching, Alexeï Navalny called the Russian population to a “smart vote”, steering away from his usual boycott strategy. The aim was not to defeat the established power, but rather to demonstrate that it was possible to see alternative voices emerge. Nonetheless, despite this context of social and political discontent, the situation is still far from  a “revolution of color” as occurred in other post-soviet States. Despite calls from the opposition, participation to local elections in Moscow remained quite low, around 20%, which is revealing of the Russian disaffection for political affairs. However, these movements of protests can be perceived as a warning.  Some political forces of opposition usually tolerated by the Kremlin, such as the communists, or even personalities close to the power in place, criticized the lack of fair elections and the repression of the demonstrations.

We are far from a dynamic which would lead to the departure of Vladimir Putin and his party United Russia. At the national level, international affairs and the role of Russia in the world are still considered paramount in public discourse, securing Vladimir Putin political strength and widespread popularity. Whereas at the local level the situation is quite dire, in the international arena, the President has demonstrated his diplomatic and strategic talents, bringing Russia back center stage. The annexation of Crimea to the Russian Federation in 2014 spurred a deep wave of popularity for Vladimir Putin, who proceeded to conceal domestic issues behind a discourse of patriotism and Russian power. Today, the leader of the Kremlin successfully advocates for – and even embodies – a certain rank for Russia at the international level, as master of the game in the Middle East, as the only actor talking to every State in the region, and as the only one to be really able to pull the strings. Recent events in Syria in October further evidence this. Following the Turkish offensive in Syria, the Kremlin maneuvered diplomatically and militarily and came out as the obvious winner. According to Bayram Balci – a researcher specialized on Turkey at Ceri-Science-Po, Vladimir Putin’s main objective was to allow to Bashar al-Assad’s regime to take back control of the whole Syrian territory, which is now in the course of being achieved.[1]

However, while Vladimir Putin has already started his last constitutional mandate, due to end in 2024, ta rang of different political movements in the country are to be taken seriously. What will happen then in this country where political alternance often appears unimaginable? According to the analysis of Igor Delanoë[2]– doctor in modern and contemporary history on Russian geopolitics – two main political streams are in balance at the Kremlin: the liberals and the “hard” forces of the regime. The latter had taken the upper hand in close circles of power since the annexation of Crimea. However, the results of local elections demonstrate that liberal forces are coming back in force, which will have to be taken into account in the management of power to maintain an equilibrium, as all parties begin placing their chips ahead of upcoming political contests.