Dídac Gutiérrez-Peris about Elections shaping the future of Europe 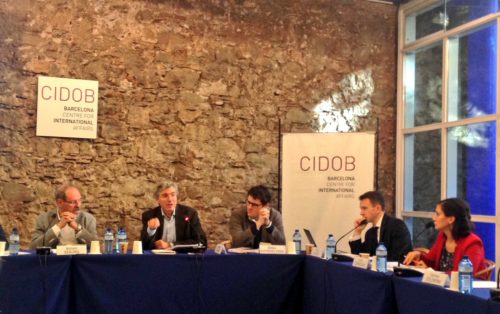 Dídac Gutiérrez-Peris participated on the 10th of November in a conference “Elections Shaping the Future of Europe: Catastrophe Avoided, Challenge Accepted” at the CIDOB in Barcelona.

Contrary to the initial fears, the most catastrophic scenario on the disintegration of the EU has been avoided. The challenge of reforming the Union, however, lies ahead. The year 2017 has been decisive for the European project. After the UK becoming the first country that voluntarily decided to leave the European Union, in 2017 four key member states – the Netherlands, France, the United Kingdom and Germany – will have held elections just after celebrating the 60th anniversary of the Treaty of Rome.  In the Netherlands, Geert Wilders, carrying a Europhobic and anti-Islam message, threatened to bring the “international populist alliance” to his country, after the victories of Trump and Brexit. In France, Marine Le Pen promised to reintroduce the national currency and a referendum on France’s membership to the EU. The proposals of Le Pen and Wilders were both defeated in the polls and, with Macron’s victory, a pro-European antidote has emerged.  In June, Theresa May held early elections to take advantage of the alleged Labour’s weakness and obtain a large majority in the parliament legitimising her hard Brexit. It did not work and, since then, the Brexit mandate is less clear. Finally, in Germany, the re-election of Merkel will set the scene for the reform of the EU and the re-establishment of the Franco-German axis. The only uncertainty is coming from the role that her probable allies of the potential Jamaican coalition will play.  The seminar analysed the extent to which these elections have shaped the European agenda and their impact for the future of the EU.